When it comes to AR-10 vs AR-15 the right choice is a matter of application.

There’s been no lack of digital ink spilled over the AR-10 and AR-15 rifles. We’ve done our fair share here. But side-by-side, how do the rifles stack up against each other and which one is right for you? Like anything firearms, it all depends on what you plan on doing when you’re behind the trigger. Given a master gun designer has yet to lay out the perfect all-around firearm that does absolutely everything demanded of it, we have to accept each one has its talents and limitations. Hopefully, we’ll clear up exactly what those are for the most popular members of the AR family here and figure out what wins for you when it comes to AR-10 vs AR-15.

Brief History Of The Rifles

ArmaLite, a division of Fairchild Aircraft, had moderate success designing special-purpose firearms for the military in the 1950s. Still known today, among their earliest achievements was the AR-5 survival rifle, adopted by the U.S. Air Force and meant to sustain downed airmen. In 1956, the company and its chief engineer — the legendary Eugene Stoner — set their sights on larger game — a contract for the U.S. Military’s battle rifle, replacing the then outdated M1 Garand. It’s entrant to the trials was the AR-10.

Designed a year earlier, the rifle was forward-looking enough to set any old breed ordnance officer’s teeth on edge. Instead of steel and wood, Stoner turned to aluminum alloy, brass and woven fiberglass for the ArmaLite Rifle (what AR stands for). There was barely a lick of cold-hard steel on the 7.62x51mm rifle, which proved its downfall. Against Stoner’s advice, ArmaLite insisted on an aluminum-steel composite barrel — one of the first such configurations attempted. Long story short, it ruptured during the torture-testing segment of the trials, and so did ArmaLite’s hopes at a military contract. The M14 would go on to eventually win the trials, besting not only the AR-10, but also the equally iconic Fabrique Nationale FAL.

Despite the setback, Stoner and company knew they had a winner on their hands. As gun writers at the time documented, the trial’s testers were impressed with his creation. Some even went so far as to say it was the best battle rifle ever put through the paces at the Springfield Armory. ArmaLite attempted to interest the world’s militaries in the AR-10, with limited success. The rifle then languished for nearly 30 years, until Knight Armament partnered with Stoner to resurrect the design. Reborn the Stoner Rifle 25 (SR-25), and configured for long-range operations, eventually the United States Special Operations Command adopted the rifle and designated as the Mk11 Mod 0 sniper rifle. Later, it replaced the U.S. Army’s M24 Sniper Rifle System with a varient designated the M110 SASS. As firearms history buffs are familiar, it didn’t take until the turn of the century for the AR-10 design to come into its own, however.

Reconfigured and shrunk down, ArmaLite submitted essentially a small-bore version of the rifle — the AR-15 — in 1958 for testing with the U.S. Army’s Continental Army Command. After studying World War I and II engagements, CONARC had the ambitious goal of replacing a laundry list of storied military arms with a single rifle. To achieve this, CONARC commander Gen. Willard Wyman requested a low-recoil 5.56 rifle, weighing 6 pounds, feeding from a 20-round magazine and the ability to penetrate both sides of a standard Army helmet at 500 meters. The AR-15 to a tee.

Learn More About The AR-10:

Initially rejected and the design sold to Colt, the rifle finally won a champion in General Curtis LeMay. In 1961, as Chief of Staff of the United States Air Force, he ordered 80,000 AR-15s, finding military personnel could fire the lower-recoil rifle more accurately and that soldiers tended to prefer them more than the 7.62 NATO M14. Army testing backed up these anecdotal accounts, finding 43-percent of soldiers qualified as an expert with the AR-15, compared with 22-percent shooting the M14. Furthering the AR’s case, the AK-47 proved a superior weapon compared the M14 in the early years of Vietnam. Despite all this, the Army’s brass remained unconvinced about the small-bore rifle. The AR-15 finally won the day in 1963, deemed the only rifle that could meet production demands, at which the M14 was faltering. In 1964, the military variation of the AR-15 —  M16 — went into production and was adopted. It continues to serve the U.S. military today along with its shorter M4 Carbine variant — both select fire weapons. Almost immediately after the adoption of the rifle by the military, Colt began producing the semi-automatic civilian version we know today as the AR-15. The name was retained to pay homage to ArmaLite’s original creation.

Both the AR-10 and AR-15 come in a variety of chamberings, which affects the range factor greatly. For the sake of simplicity, we’ll confine our discussion to the most popular caliber for each rifle: the .223 Rem./5.56 NATO for the AR-15 and .308 Win., for the AR-10. Both are excellent options for AR rifles, but, generally speaking, each excels at different ranges.

For close to mid-range shooting, it’s difficult to beat an AR-15 in 5.56. It’s an intermediate-range cartridge, designed to shine 500-yards on in. And given its light recoil, even in a platform as lean as the AR-15, it is a simpler system to place multiple shots very accurately on a target. If it’s longer ranges you seek to master, then the AR-10 is probably going to fit the bill. There’s a reason why the Army chose a variant of the SR-25 as the successor to the bolt-action M24 Sniper System. The larger calibers with their heavier bullets are simply easier to get on target 500-yard plus.

As of late, the AR-15 has added more long-range options (discussed more in the calibers section) that keep pace with AR-10 standbys. Though, as discussed below, these are small-bore options. They’ll go the distance but might not have the energy you require for some long-range applications.

Measured against the entire world of rifles, the brother ARs are extremely light. More than simply materials, this attribute is thanks to Stoner’s pioneering direct-impingement gas operation (what Stoner called an “expanding gas system”) that relies on little more than tubes, gas block and gas key to cycle the rifles. Gracefully sparse, there’s no piston to add extra weight to either rifle. However, head to head, there is typically a notable difference in the heft between the AR-10 and AR-15. In general, most AR-10s weight in at about 7 pounds empty and the AR-15 right around 6 pounds. On paper, not worlds away. In an operation where either rifle would suffice, that one less pound has the potential to make the rifle more manageable. The AR-15 is also trimer in overall size.

Certainly, 14.5-inch barreled AR-10s are around, but they are not as common as the 18- and 20-inch variety. Given that most shooters have distant targets in mind when they load up the rifle, this shouldn’t come as a surprise. The extra velocity the longer bore milks from the cartridge is worth the rifle being a bit more unwieldy. Conversely, AR-15’s with 14.5-inch barrels are legion, which also makes sense. Not only is its aim generally medium range in, it is also a favored for CQC. Opting carbine makes it all the easier to manage the AR-15 in the tight confines of a house or inside a building.

Not to knock diehard AR-10 shooters’ collective noses out of place, but the AR-15 has its big brother beat in spades in this facet. 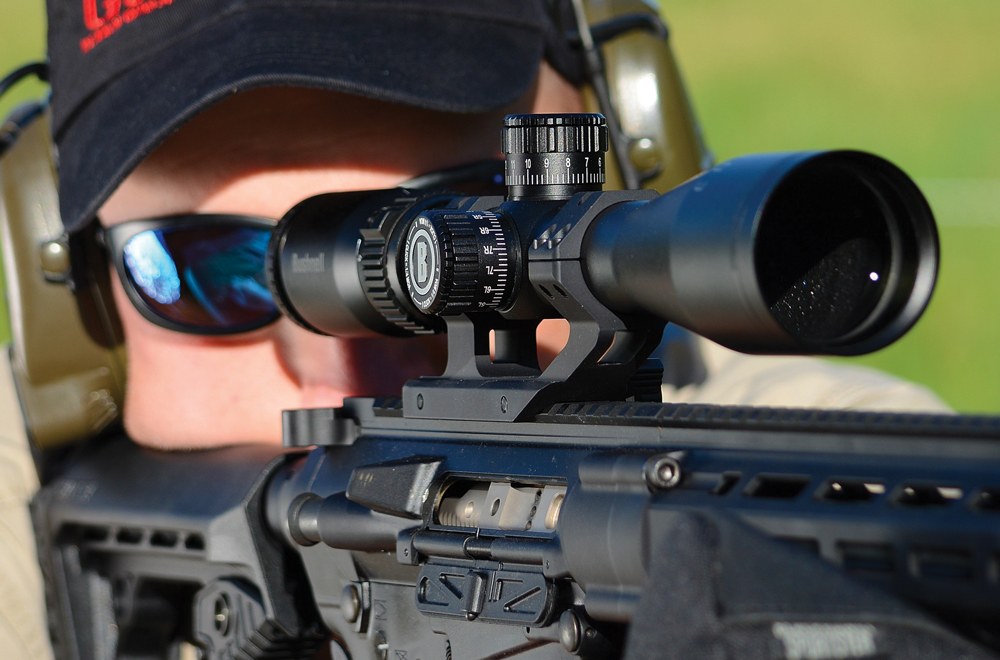 Given its long military service record, the rifle is much more standardized than its big brother. In turn, the platform is that much easier to build, upgrade and maintain. For the most part, it’s a pick and place procedure that involves little compatibility research, if the AR-15 is aligned with mil-spec standards. A latecomer to military service, the AR-10 had more time to be tinkered with, thus skewing how the gun is put together. In short, different brands of the rifle don’t play nice with each other.

Thankfully, there is some consistency with two patterns dominating the market — DPMS’s LR-308 and ArmaLite’s AR-10. The issue is, the receivers and the major internal components are not compatible. A DPMS upper receiver is not meant to go on an AR-10 lower receiver. An AR-10 bolt-carrier group is not designed to function with an LR-308 pattern barrel. Neither uses a barrel nut with the same thread count. This doesn’t mean there aren’t a multitude of parts and aftermarket upgrades available for the AR-10, LR-308 and other variations. There are plenty of them — though, LR-308s are more common and, in turn, tend to have an availability and selection advantage. Shooters who opt for the larger AR-style rifle must have their research caps on and show extra diligence when shopping to make sure they’re getting the right part for their rifle.

Both rifles’ caliber choices have swelled over the years. It’s at the point now that if there’s a caliber you can think of, there’s most likely an AR-15 or AR-10 chambered for it.

Generally speaking, AR-10-style rifles — given their larger recievers — tend to shoot more larger and more powerful cartridges. Originally chambered for .308 Win./7.62x51mm NATO, there are examples of 6.5 Creedmoor, .45-70 Govt., and even .300 Win. Mag. rifles. If you’re willing to go proprietary, there’s hardly a cartridge the AR-10 can’t handle and, most likely, some entrepreneurial gunmaker has a rifle chamber for it. The AR-15 is nearly equally as deft in its caliber selection, with a host of options pouring out in the past two decades. However, since it was designed to fire the rather demure 5.56 NATO round, it faces some limitations. It’s never going to digest the more powerful fodder of its big brother.

This historically has meant the AR-10 was the more logical long-range option, but times have changed over the years. Through the work of Nosler with the 22 Nosler and Federal Premium with the .224 Valkyrie, the market has expanded to include some ballistically talented AR-15 rounds. Designed to give the likes of the 6.5 Creedmoor a run for its money, the small-bore thunder-bolts are capable of striking down range. That said, what they bring to the table in ballistic coefficients, they don’t make up for in energy when they reach a distant target compared with, say, a heavier AR-10-compatible round such as the .308 Win., or 6.5 Creedmoor.

Nevertheless, near or far and everything in between, the AR-family of rifles have you covered.

Disparate in many categories, there is some crossover between AR-10 and AR-15 parts, at least concerning the popular patterns of the larger rifle platform:

Who wins out when it comes to the AR-10 vs the AR-15? Easy: both. Though similar in design and operation, the rifles are essentially meant for different duties. This moots the point of which one should be preferred. Really, it comes down to your application and which rifle will execute it most efficiently. Honestly, if you had to choose, the best answer would be one of each.

62 Printable MOA Targets with DOT Drills – Rifle Range in YARDS This impressive target pack from our friends at Storm Tactical contains 62 printable targets for rifle and handgun range use. Target grids and bullseye sizes are in MOA. Ideal for long-range shooting! Get Free Targets